Almog Sharvit is a bassist and composer based in Brooklyn, NY. He creates surreal, maximalist compositions that combine both acoustic and electronic textures. In New York, Almog has established himself as a creative force: his collective trio KADAWA with Tal Yahalom (guitar) and Ben Silashi (drums) has received accolades and features from The New York Times, All About Jazz, Indiecurrent, and the Vancouver Sun among others.

KADAWA has toured internationally across Switzerland, Germany, Spain, Italy, Holland, UK, and Israel: the band released its debut album in 2017, and has since collaborated with Grey McMurray, John Escreet, Jon Irabagon, and Adam O’Farrill, while working on the production of their 2nd album, which is slated for release in 2022.

Almog’s debut album as a leader “Get up or Cry” is out now on Unit Records (Switzerland). The album blurs electronic music, psychedelic rock, bluegrass, 20th-century classical music, and jazz into dizzyingly beautiful, wholly unique songs. “Get Up Or Cry” was recorded in a single day at Wonderpark Studios in Brooklyn. In post-production, Sharvit applied experimental techniques usually found in pop and electronic music to the songs – the record features filter sweeps, heavy distortion and compression, and creative automation and panning that he gladly says “will knock the dust off your stereo.” 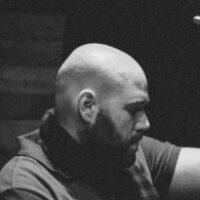