Born in pre-state Israel (1943) to the Bachi family who emigrated from Italy in 1939. Grew up on a little, isolated farm established by her parents in 1941 in the Sharon region.

Began painting in oils at the age of eight under the guidance of her mother, the artist Elena Colombo Bachi, who in her youth had been a pupil of the Italian artist Casorati.

Since 1956 participated in over 70 exhibitions such as One Artist Show Seasons Will Tell, at the Mishkan Le’Omanut, Museum of Art, Ein Harod, 2006, Matters of the Heart A Selection from the David J. Azrieli Collection, at the Tel-Aviv Museum of Art, Tel Aviv, 2009/2010 and the Italian Pavilion of the 54th International Art Exhibition of the Venice Biennale, Venice, Italy, 2011. Lives and works in Haifa, Israel. Married and mother to four. 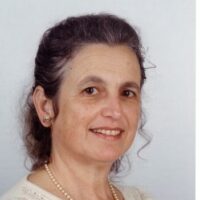