Assaf Chen was born in 1990, Israel. He began playing the Horn at the age of 10 at the Rammat-Gan Conservatory, with Mr. Yaakov Kling. Then, he studied at the Thelma Yellin High School of the Arts with Mr. Michael Slatkin.

After the IDF military service, between 2011- 2015, He completed his B.A studies at The Buchmann Mehta Academy of Music – Tel Aviv University at Prof. Chezy Nir class. Throw that period, He had been awarded with expellant scholarships grants from The America-Israel Cultural Foundation, for outstanding young Musicians.

In this days, He study at The Zürich Hochschule der Künste –Switzerland, for the M.A
studies, at Prof. Nigel Downing and Radovan Vlatkovic class.

Also, He preformed with many orchestra in Israel and Europe including: 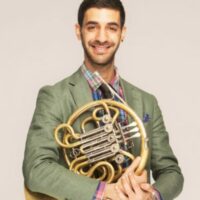