Israeli-born violist and composer Atar Arad is a faculty member at the Jacobs School of Music, Indiana University, Bloomington. His summer activities include teaching at Keshet Eilon, Israel, Domaine Forget, Canada, Heifetz Institute and the Steans Music Institute (where he has served as faculty since 1991).

A “late bloomer” composer, Arad’s compositions include a Solo Sonata for Viola, two String Quartets, a Viola Concerto (which he premiered in Bloomington, Brussels and in Stockholm) and more. His Tikvah for Viola Solo was commissioned for the 2008 Munich International Viola Competition by the ARD. His Listen (three poems by W.S. Merwin) for tenor, clarinet, viola, cello and bass was written for the International Musicians Seminar’s concert tour in England with singer Mark Padmore. Epitaph for Cello and String Orchestra was written for cellist Gary Hoffman who premiered it in Kronberg, Germany, with the Kremerata Baltica Orchestra (Arad performed the viola version of this piece at the International Viola Congress in Rochester, NY). Arad performed and presented his Twelve Caprices for Viola on several USA, Canada, Israel and European concert tours. The Caprices are published by Hofmeister Musikverlag, Leipzig.

Recent performances include the Primrose Memorial Concert at BYU and, as a part of his services as the Lorand Fenyves Distinguished Visitor, in Toronto.
In November 2018, Arad was a featured artist at the International Viola Congress in Rotterdam, premiering his new concerto for viola and strings, titled “Ceci n’est pas un Bach”.
Atar Arad is a recipient of the American Viola Society’s Career Achievement Award (June 2018) and the International Viola Society’s Silver Alto Clef 2018 “in recognition for his outstanding contributions to the viola” (November 2018).
Arad plays on a viola by Niccolo Amati. He uses a set of PI strings by Thomastik. 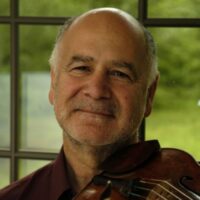