Avishai Cohen is a leading figure on the international jazz scene and one of the most sought-after trumpet players of his generation.
Though deeply rooted in the bebop and post-bop tradition, Mr. Cohen is taking jazz in new directions, making waves as an improviser, composer, and bandleader.

Originally from Tel Aviv, Avishai began performing at age 10. He toured the world with the Young Israeli Philharmonic Orchestra and went on to become the trumpet player of choice for many leading jazz, rock, pop, studio, and television projects.

Avishai received a full scholarship to attend the Berklee College of Music in Boston, and in 1997 he placed third in the prestigious Thelonious Monk Jazz Trumpet Competition. Mr. Cohen came of age as part of the fertile scene at Smalls, the storied New York jazz club, where he developed his artistic vision alongside such friends and colleagues as pianist Jason Lindner and bassist Omer Avital. Here the impera­tives of jazz tradition and innovation were not in conflict, but rather merged into one powerful creative stream.

Mr. Cohen flourished in an environment where hard-driving swing, open-ended funk, Latin and Middle Eastern rhythms, complex extended forms and free improvisation converged under one roof, drawing en­thusiastic audiences. All of his diverse work, as a leader, co-leader, and sideman is informed by this broad-minded legacy, which has given jazz new vitality and relevance in the 21st century.

Since 2010, Avishai is a member of the prestigious SFJAzz Collective, which ranked at #5 top jazz band in 2010 downbeat’s critic poll.

In addition, he has recorded 7 albums as a co-leader with his 2 side projects: The 3 Cohens, and Third World Love. Avishai can be heard on such soundtracks as ‘American Gangster’ and ‘Soul Man’ as well as on many other albums as a side-man. DownBeat Magazine hailed Avishai’s last album as “singular Musicianship”, and the New York Times' Nate Chinen called Avishai Cohen “an assertive and accomplished trumpeter with a taste for modernism”. 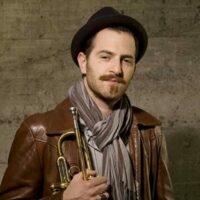