Eliav was born in 1977 in Tel Aviv, Israel, and currently lives and works in Barcelona, Spain.

In 2002 graduated from the Academy of Fine Arts “Bezalel” in Jerusalem. In 2003 she completed her studies specializing at the Academy of Fine Arts of Rome. Since 2006 she has been active in the art world as a painter and later on also as a video and performance artist, exhibiting in Israel and worldwide, solo and group exhibitions. Eliav has been teaching applied art since 2009, either in private classes as well as in a professor position in “Estudio Nomada” (Barcelona) and in the department for art and design, in “Hayovel” school, (Herzeliya, Israel).


Main events and exhibitions that have featured her works: 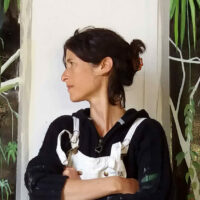