Ayelet AMotz was born in Israel. Her musical education began as a pianist in Kfar-Saba conservatory, where she studied for 8 years. She has Graduated from the “Thelma-Yelin” high school and served as a “Fine Musician” during her military service. Later, as a singer, she has graduated with Honours (B.Mus and an Artistic Diploma) from the Rubin Academy of Music, Tel Aviv University.

Ayelet participated in master classes given by the soprano Edith Mathis, Prof. Hilde Zadek, Ms. Elison Pierce and the pianist Mr. Hartmut Hoell among many others. Was the Recipient of the American-Israel-Cultural-Foundation scholarships (AICF) for many years and a finalist in the Spring Competitions (2001&2003) held by the same organization in Tel-Aviv.

For several years, Ayelet participated in the International Opera Summer Program in Tel Aviv (IVAI), directed by Ms. Joan Dornemann from the Metropolitan Opera in NY. In the last years has studied at times with Mrs. Patricia McCaffrey from NY and with Mrs. Brigitte Eisenfeld from Berlin and lately in Israel with Mrs. Gila Yaron.

As a recitalist, Ayelet has colaborated with pianists and ensembles such as: Prof. Jonathan Zak, Dr. Tomer Lev, Irena Friedland, Arnon Erez, Ido Ariel, Galatea Ensemble and more. Between 2007-2009 participated with the pianist Jonathan Zak in the chamber-music Festival in Eilat as well as in the chamber music series in the Israel conservatory of Music, Tel-Aviv, Rehovot conservatory and “Zavta” Tel-Aviv.

In operatic productions she sang the role of Dido in the opera “Dido & Aeneas” by Purcell , the role of Victoria in scenes from “Victoria and the men” by Zipi Fleischer and the role of Cornelia in the opera “Giulio Cesare” by Hendel in the New Israeli Opera.

Ayelet is a member of the teaching board in the “Gary Bertini school for choir singing” in the Levinsky College in Tel Aviv since 1998. 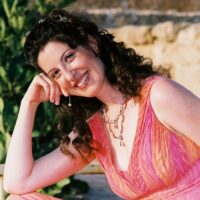