Ayelet Karni is a musician, a player of recorders, historical oboes and shawms, both as a soloist and in various ensembles.

Ayelet performed as a soloist with orchestras such as the Capriccio Barockorchester, Concerto Foscari and Haifa Symphony Orchestra; she has performed extensively in many recitals and concerts across Europe, in the U.S.A, and in Israel, and in many festivals, among them the Bergen International Festival and London Handel Festival. She recorded concerts for Radio France, and the BBC, Swiss Radio and Television, and Israel’s “Kol HaMusica” radio stations. Ayelet plays with orchestras such as Le Parlement de Musique, Arte Dei Suonatori, the Jerusalem Baroque Orchestra and Barrocade. She has played under the baton of famous conductors, among them Andrew Parrott, Christophe Rousset, Christophe Coin and Martin Gester.

Ayelet has won many prizes and scholarships, including the Swiss Government Scholarship; The Jerusalem Academy President’s Prize; scholarships of the America-Israel Culture Foundation since 2002; first prize of the Haifa Symphony Orchestra’s Competition; first prize of the concerto competition at the Jerusalem Academy of Music; and the Chais family’s scholarship for excellent musicians. Together with the ensemble ‘Les Mélomanes’, she was a finalist at the York Early Music Competition.

Nowadays Ayelet lives in Basel and teaches at the Musikschule Zofingen, alongside her international concert career. In her performances she puts an emphasis on communicating with her audience and presenting the historical context of the works performed. 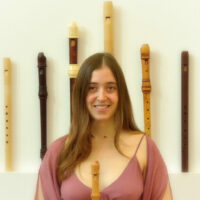