Belle Shafir weaves together strands of horsehair to create delicate, linear objects – ethereal, material drawings. The act of crocheting creates small “insects” or “horses” that are affixed to the wall with needles; here and there, strands of hair or threads dangle from these creatures. These images, which are made to partake of a laboratory-like system, have replaced the natural materials – tree bark, fruit, earth and dry leaves – that appeared in Shafir’s early works.

These minimalist works are reminiscent of the hundreds of sketches created by Shafir over the years, yet the unusual use of horsehair endows them with a powerful, dynamic quality that is greater than that of a pencil or pen. Shafir’s choice of this charged material is not coincidental: her parents, both Holocaust survivors from Poland, later immigrated to Germany and turned to raising horses. Life on the farm and the routine of caring for the horses were a central part of Shafir’s experience as a girl. Yet as a young woman, she rebelled against her parents and their lifestyle, immigrated to Israel, embarked on a career as an artist, and detached herself from her past. The choice of using horsehair forty years later, in the aftermath of her parents' death, bespeaks a process of coming to terms with the past and reconnecting to the childhood life that she later rejected.

Shafir’s knotted, knit images resemble tiny horses or jointed animals created through the use of a delicate form of women’s work, like small, lightweight toys. The fact that some of these images lie on a web woven of hair, or are affixed to the wall with needles, calls to mind Louise Bourgeois’ sculpture of a spider, which is titled Mother. For Bourgeois, the spider symbolized her mother, who wove and repaired tapestries. For Shafir, the tiny horses conjure up her father’s house, representing both an allusion to the world she came from and a form of insight concerning her past. 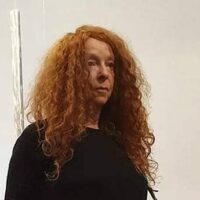