Praised as a “marvellously harmonious duo” (Berliner Morgenpost), the Brillaner Duo exemplifies the scientifically proven fact that the clarinet’s warm and human sound blends into the piano better than any other instrument. Winning the Possehl-Prize in Germany, as well as the America-Israel Cultural Foundation and the Ronen Foundation grants, the Brillaner Duo performed at such celebrated halls as the Berliner Philharmonie and the Carnegie Hall. Their debut CD was described as a “fascinating mixture of two dazzling artists” (Das Ensemble Magazine). Their album “Petite Piéce” followed in 2010. Their programs encompass the breadth of the clarinet-piano repertoire (featuring masterpieces of Brahms, Schumann, Weber, Poulenc) as well as the duo’s own arrangements for this medium (such as Mozart and Janacek’s violin sonatas). The duo is also passionate about contemporary music, and has premiered numerous pieces of young composers. The duo has taken part in the Schleswig-Holstein (Germany), Radio France (Montpellier, France) Ljubljana (Slovenia) and the Bangalow (Australia) Music Festivals, and collaborated with leading ensembles such as the Borromeo and the Jerusalem String Quartets. Committed to the engagement of new audiences, the duo often presents moderated concerts in a variety of community settings. Recently they have served on the faculty at the Yellow Barn Festival’s Young Artists Program and coached master classes in various conservatories and universities in Australia (including at the Melbourne University and the Australian National Academy of Music), USA (Boston Conservatory) Italy (Mahler Academy in Ferrara), Switzerland, Canada and Israel (Jerusalem Music Centre). The Brillaner Duo can be heard on numerous radio stations, including WQXR in New York, WGBH and many prominent radio stations in Europe (Bayerischer Rundfunk, Radio Suisse Romande, DeutschlandRadio Kultur) and in Israel.

Shirley Brill’s career was launched with a performance as a soloist with the Israel Philharmonic Orchestra conducted by Zubin Mehta. She has since performed with various international orchestras, most recently as a soloist with the Deutsches Symphonie Orchester at the Berliner Philharmonie. Her numerous international awards include the top Prize at the Geneva International Competition in Switzerland and a special prize at the International ARD Competition in Munich. Working with world-renowned mentors such as Sabine Meyer and Richard Stoltzman, “Shirley Brill is on a fast track to making an international name for herself“ (Prenzlauer Zeitung, Germany). (www.shirleybrill.com) 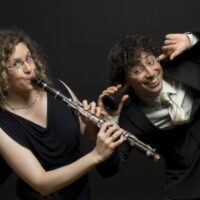