At the age of fifteen, the clarinettist Chen Halevi’s debut with the Israel Philharmonic Orchestra under the baton of Zubin Mehta created a sensation. Ha'aretz wrote: “This boy is blessed with a wonderful fusion of artistic musicality and an amazing playing technique, all in the service of the muses. ”

Since then he has performed with several of the most important orchestras in the United States, Europe, and Japan, including the Israel Philharmonic, the Tokyo Symphony Orchestra, the European Soloists, the Heilbronn Chamber Orchestra, the Moscow Virtuosi, the Jerusalem Radio Orchestra, the MDR Philharmonic Leipzig, the NDR Sinfonieorchester Hamburg, and the Deutsche Symphonie-Orchester Berlin.


A native of the Negev desert in Israel, he studied the clarinet with Yitzchak Kazap and Richard Lesser, continuing with Mordechai Rechtman and Chaim Taub for his chamber music studies. Today, Chen Halevi is considered to be one of the world’s leading virtuoso clarinettists, playing recitals, concertos, and chamber music with equal success. He is famous for his impressive repertoire range that goes from the most difficult contemporary music to playing early music on authentic "period" instruments.


A frequent participant in summer festivals, Chen Halevi has appeared at the Marlboro, Ravinia, and Santa Fe Festivals in the US, while his European appearances have included stops at SchlesswigHolstein, Colmar, Forcalquier, Prussia Cove, Davos, Rolandseck, Aldebburgh and Verbier Chamber Music Festivals, as well as the PMF Festival in Japan and the Perth International Arts Festival.


He is internationally acknowledged as a master specialist in the performance of contemporary music. His close ties with composers have led him to perform a great number of works by, amongst other, Berio, Kurtag, Lindberg, Golijov, Maresz, Jarrell, Ferneyhough, Stroppa, Mantovani and Ades. Chen Halevi is a dedicatee of-to name a few- a cycle of pieces by Denis Cohen, Nodus for solo clarinet, “Ombre” for clarinet and electronics and “soft machine” for clarinet and cello as well as “Les asperges de la lune” for solo clarinet by Sven Ingo Koch and a clarinet trio by Lior Navok.


He is now working on a major recording project, which presents an anthology of 20th Century music for clarinet, and includes his selections of the solo, chamber music, concerto, and electronic works, which changed the way we look at the clarinet today.


Teaching and giving master classes feature are important priorities in his career. He is currently the Clarinet Professor in the Trossingen Hochschule fur Musik in Germany and has traveled all over the world to give Master Classes to spread his school of teaching and playing. Since 2007 he is a Faculty member in the summer master classes at the Banff Centre.


In 2007 Chen Halevi founded ClaRecords – a company that will commission, produce and record new pieces from today’s leading composers as well as young and upcoming ones. ClaRecords will be working with other modern art forms to stimulate dialogue between different modes of expression in the XXIst century. In its first year, Clarecords had commissioned 5 new pieces and made a music video in 3D computer animation. 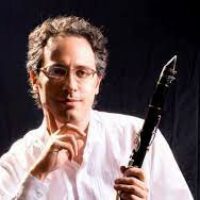