Israeli percussionist Chen Zimbalista has dazzled audiences around the world with an enchanting array of rhythmic sounds that he cajoles from more than forty instruments, played with his lightning quick hands, some of them at the same time. His music – a euphonious blend of pulses and beats – defies classification. A true feast for the senses, his programs are taken from the classical, blues, jazz and occasionally from the rock repertoire. Chen developed his skills in Tel Aviv after he was inspired by a drummer at a wedding when he was just five.

Among his teachers are Alon Bor of the Israel Philharmonic, Morris Lang of the New York Philharmonic, and Bent Lillof of Copenhagen. A winner of several international competitions, including the Francois Shapira prize, Chen has performed at the Kennedy Center, with the Detroit Symphony, Israel Philharmonic, Symphonica Brazilera, Ankara Symphony, Schleswig Holstein and Stresa music festivals, Istanbul music festival to name just a few. His CD, Desert Beat is issued by “Koch Discovery” & Music for Marimba & Piano by “Zimbasound”.

By mysticism or happenstance, Chen Zimbalista traces his name to an eastern European Ancestor who played the cimbalom. 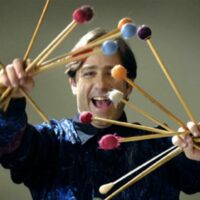