The Israeli clarinetist Dana Barak has performed in Europe, USA, South Africa and Israel as a soloist and as a chamber musician and in venues such as the Berliner Philharmonie, Wigmore Hall London, Concertgebouw Amsterdam, Tonhalle Zürich and the Walt Disney Concert Hall in Los Angeles.

As a soloist, Ms. Barak has performed at the Open Air Festival „Das Fest” Karlsruhe, with the Israeli Chamber Orchestra at the “Etnachta” concert broadcasted live on “Kol Hamusika,” with the Bruchsaler Barockensemble, the Buchmann-Mehta Symphony Orchestra and more. In addition to performing the classical repertoire, Ms. Barak is a champion of new music, playing regularly with Ensemble Modern Frankfurt and Ensemble Phoenix Basel. She has worked closely with composers such as Helmut Lachenmann, Matias Spahlinger, Jörg Widmann, George Benjamin and Pascal Dusapin, and has participated in new music festivals such as the Internationalen Ferienkursen für Neue Musik in Darmstadt, Now! Transit Festival in Essen, Cresc. Festival in Frankfurt, Musikfest Berlin, and ManiFeste in Paris.

As an orchestral musician, Ms. Barak has played with the Frankfurt Radio Orchestra and the Darmstadt State Theater Orchestra among others, and has worked with Maestri such as Zubin Mehta, Kurt Mazur, Gustavo Dudamel, and Jonathan Nott. She has also recorded for television in Israel, Holland, South Africa and Germany, and on the radio “Kol Hamusika” in Israel, SWR, WDR and MDR in Germany, SRF2 in Switzerland and RTV in Slovenia.
Dana Barak is also an active pedagogue, giving regular Master Classes in both Clarinet and Chamber music in Germany and Spain.

She performs on historical clarinets and has taken additional courses with Lorenzo Coppola, Ernst Schlader, Pierre-André Taillard and Alberto Grazzi.

Originally from Israel, Dana Barak received her Bachelor of Music degree from the Buchman-Mehta School of Music at the Tel Aviv University, supported by the Buchman-Mehta Foundation. In addition, she studied at the Accademia Musicale Chigiana in Sienna, Italy, under Antony Pay and Alessandro Carbonare, and subsequently received her Masters degree with Merit with Prof. Wolfgang Meyer in Karlsruhe supported by a full DAAD scholarship. She continued studying with the clarinetist and composer Prof. Jörg Widmann in Freiburg and later on graduated with a second Masters degree in Contemporary Music performance in Basel, supported by a full scholarship from the Swiss Government. From 2014-15 she was invited to take part in the International Ensemble Modern Academy with a full scholarship and later on, and through the generosity of the Pitzer Foundation, she also specialized in Chamber Music in Frankfurt. 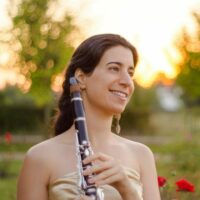