Born in Israel, his feature film work began In 2001, when he was brought aboard as score producer for Dover Kosashvili’s feature film Late Marriage, the highest-grossing Israeli film of the decade, one of Entertainment Weekly’s Ten Best Films of 2002 and Newsweek’s Top 15 Films of 2002. Among his recent scores are the Chinese 3D sci-fi feature Impossible, which stars several of China’s biggest stars and opened on 20,000 screens, and The Trouble With Bliss, starring Michael C. Hall (Dexter), Lucy Liu (Elementary, Charlie’s Angels), Peter Fonda (Easy Rider), Brie Larson (Room, 21 Jump Street) and Chris Messina (Vicky Cristina Barcelona). The film’s score was released on the Sony Classical label. His most recent feature film projects were assisting composer Christopher Lennertz with production and additional music on the upcoming Robert De Niro/Uma Thurman/Christopher Walken comedy, The War With Grandpa, and working with composer Tony Neiman on the Russian sci-fi fantasy film Gatekeeper of the Galaxy.

Recently he scored The Tattooed Torah – an animated, holocaust tale based on a children’s book and narrated by actor Ed Asner. Alcheh completed both his Bachelor’s and his Master’s degrees in composition at the music academy at Tel-Aviv University and was a visiting scholar to the Music Technology Department at Chicago’s Northwestern University. Daniel lives in Los Angeles with his wife, writer and children’s book author Jamie Kiffel-Alcheh, their daughter and their cat.

In 2012, Alcheh was named Composer-in-Residence in the Concerti in San Martino festival in Switzerland where his commissioned Septet was performed. Other notable concert works are his virtuoso violin-solo piece, “Nocturne and Aubade,” chosen as the obligatory contemporary piece for competitors to perform at the Yehudi Menuhin International Violin Competition, and his demanding “Dying Pianos” for piano duo and recorded sound, commissioned by The Israeli Piano Duo. He is currently working on several American and European concert commissions and projects. 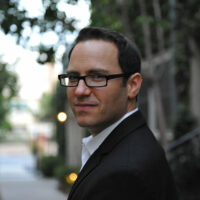