Daniel Neyman was born in Israel and began his piano studies at the Karmiel Conservatory with Mrs. Svetlana Pachter. He served in the IDF as a Distinguished Musician and studied towards his Bachelor’s in Music degree at the Jerusalem Academy of Music and Dance with Prof. Michael Boguslavsky. Daniel studied for his Master’s in Music degree at the Yale University School of Music with Prof. Melvin Chen. He performed in Israel, France, Germany, Czech, Hong Kong, Turkey, Spain, Azerbaijan, Hungary, Portugal and U.S.A. 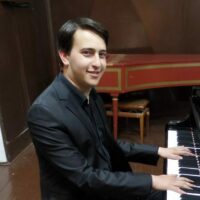