Born in 1993, the Russian-Israeli violinist Dmitry Daniel Askerov discovered his love for the violin at the age of six. After only one year of playing the instrument, Dmitry took part in and won several competitions, at the age of eight he won the America-Israel Cultural Foundation “excellence scholarship” being the youngest performer to win this prize since Itzhak Perlman.

​With 16 Dmitry started studying with Elena Mazor at the Buchmann-Mehta School of Music. In the course of his early career, he already claimed several prizes from renowned international competitions such as the 2006 International “Remember Enescu” Violin Competition in Romania and in 2012 the Clairmont Competition in Israel.

​After having proven himself as an outstanding musician, Dmitry started playing as a soloist with orchestras around the world such as the Johannesburg Symphony Orchestra, the Bern Academy Orchestra, the Israel Philharmonic Orchestra and many more. He also gave solo recitals in the United States, Europe and Israel.

​For many years he took part in the Keshet Eilon master class, where he met many inspiring musicians, such as Ivry Gitlis, Shlomo Mintz and Ida Haendel. During the years of concerts and concert tours, Dmitry started to find his own technique and his own sound. Dmitry also plays the viola, which he regards as his second instrument. He has given several recitals on the viola. Dmitry is a devoted pedagogue and set a goal of bringing music to parts of the world where there is not much possibility in the classical field. This is the reason he started his own festival in Florida, the Crescendo Music Festival. In addition to his musical career, Dmitry decided to create a competition that would bring opportunities for a new generation of musicians to start a career. In 2016 he founded the New Stars Competition.

Dmitry’s unquenchable thirst for knowledge and inspiration from other musicians led him to obtain a Master’s degree from the Zurich University of the Arts, where he studied with Ilya Gringolts. Dmitry also met several times with the cellist Gavriel Lipkind and performed with Anna Lipkind in Germany and Israel. Dmitry was also able to take master classes from some of today’s leading violinists such as Zachar Bron, Hagai Shaham, Rudolf Koelman, Miriam Fried, Julian Rachlin and Leonidas Kavakos.

Dmitry has always considered chamber music to be the highest form of music-making. For this reason, he founded his own String Trio, the Askerov Trio.

He plays the violin made by Philipp Augustin given to him on loan indefinitely by generous donors. 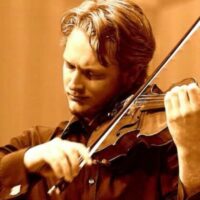