Eden Arad, a 20-year-old Israeli harpist, currently pursuing her Bachelor of Music degree at the Mannes School of Music in NYC, under the guidance of Emmanuel Ceysson, Principal Harpist of the Metropolitan Opera Orchestra.

She began to study the Harp at the age of nine, and previously studied with Ms. Sunita Staneslow and Ms. Gittit Boasson, a harp teacher at the Jerusalem Academy of Music and Dance.

Eden studied in “HaKfar HaYarok” (“The Green Village”) High School in a gifted class, majoring in classical music. There, she was the principal harpist of the school orchestra.

Eden was awarded the National Israeli Harp Competition, including the First Prize for Excellence in the 1st Israeli Harp Competition in 2011. She was granted the America-Israel Cultural Foundation scholarships for the years 2015-2019, Excellence Scholarships from the Jerusalem Academy of Music and Dance for two years in a row, an Excellence Scholarship from the Jerusalem conservatory “Hassadna”, and a scholarship from “Académie Internationale d’Eté de Nice”.

Eden has played as a soloist and as an orchestra player under the baton of Krzysztof Chorzelski, Talia Ilan, Yi-An Xu, Roit Feldenkreis, Chen Zimbalista, Michael Wolpe, Eyal Ein-Habar, Benjamin Yusupov and others, and performed at the Recanati Hall in the Tel-Aviv Museum, Felicja Blumental Music Center, Beit Daniel (in Zichron Yaakov), Jerusalem Theater and in the Culture Palace (in Tel-Aviv).

She has participated in masterclasses and taken lessons from a number of renowned harpists including Marie-Pierre Langlamet, Chantal Mathieu, Park Stickney, Monika Stadler, and Cristina Braga. 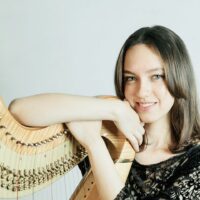