He started his studies with Elena Mazor at ‘Buchmann Mehta School of Music at Tel-Aviv University’, and is currently studying at ‘Hanns Eisler Hochschule fur Musik’ Berlin with Prof. Stephan Picard.

Edi performs as a violinist in many ensembles and chamber music in many different Entities. Edi was part of the David Goldman Program for Outstanding Young Musician and Jerusalem Music Center Programs. He is one of the Leading of the Young Israeli Philharmonic Orchestra.

In 2014 Edi participated in the International program for string players Perlman Music Program and regularly participated in Musethica projects in Germany, Israel, Spain and Sweden.

Edi is a recipient of the America-Israel Cultural Foundation Scholarship since 2007 and is an Alumnus of the ‘Keshet Eilon Mastercourse’.

He plays on “N.Vuillaume”, a violin on loan from America-Israel Cultural Foundation (AICF). 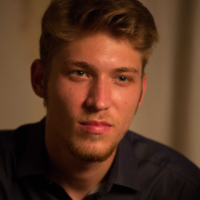