Elad is currently studying at the Buchman – Mehta School of Music in the class of Tibi Cziger.
He served at the IDF, under the status of an “Outstanding Musician”.
Elad is being supported by the AICF since 2017, and is being supported with the “excellence scholarship” since 2019.

Elad participated in the “David Goldman Program” in the Jerusalem Music Centre.

In November 2017, Elad participated in “Aurora Festival” in Sweden, and played for the professors Yehuda Gilad and Christian Stene. he also played in a concert of the festival in Vanersburg, Sweden.

In addition, in February 2016 Elad won the 4th prize at the Kfar-Saba competition, and in 2018 he won the 2nd prize in the Chamber Music competition of the JAMD. 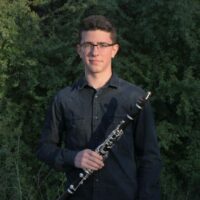