Gaia Reemy was born to a musical family in 2002 in Kfar Shmuel, Israel.
Her father, Eran, is a trumpet player at the Israel Philharmonic Orchestra, a conductor and a senior teacher at The Jerusalem Academy of Music and Dance and The Buchmann-Mehta School of Music, and her mother, Anat, graduate of the Tel Aviv Music Academy majoring in piano as music therapy.

Gaia began playing the piano at the age of six and proceeded with French horn at ten.
She studied with Yuri Gorelin, Alon Re’uven and Chezy nir.

Since October 2020 she studies with Yoel Abadi at the Buchmann-Mehta school of music in Tel Aviv.

Gaia is a Graduate of Thelma Yellin High School of the Arts. She graduated with honors from the classical music department. She played at the Thelma Yellin Symphony Orchestra conducted by Guy Feder. In 2018-2020 she was the principal horn player of this orchestra.

In 2017-2020 she took part in the Jerusalem Music Centre’s programs for outstanding young musicians. This includes being a part of the Young Israel Philharmonic Orchestra and the David Goldman chamber music program.
In 2018 Gaia won the 1st prize at the Kfar Saba national brass and wind competition (brass) in the age category 14-16.

In 2018 and 2019 Gaia performed in professional ensembles such as Israel Chamber Orchestra, Raanana Symphonette Orchestra, and Tel-Aviv woodwind quintet. In 2020 she played in a special audition to play solo with the IPO. Thanks to her impressive playing at the audition, Gaia has gotten a special option to play as part of the IPO in a special concert. Because of the Corona crisis, the concert was canceled.

Gaia was part of the special national program for outstanding young musicians of the Israel Ministry of Education.

In August 2021 Gaia took part in the ISA summer masterclasses course of the MDW in Austria. During which she had lessons with Marie-Luise Neunecker (Frankfurt Radio Orchestra) and André Cazalet (Orchestre de Paris).

Gaia is a recipient of the American-Israel Cultural Foundation scholarship since 2017. She also received a scholarship from the Ronen Foundation. 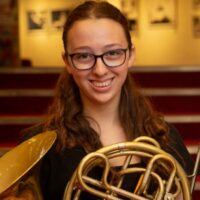