Gali Knaani was born in 1995 in Kibbutz Hulata, Israel. He began his cello studies at the age of 9 with Mr. Uri Chen and continued with Prof. Hillel Zori at the Buchmann-Mehta School of Music.

Knaani achieved his B.MUS degree from the Jerusalem Academy of Music and Dance at the class of prof. Zvi Plesser. He is currently pursuing his Master’s degree at the Shepherd School of Music at Rice University at the class of Mr. Norman Fischer.

Knaani performed as a soloist with different orchestras in Israel, such as the Jerusalem Academy Symphony Orchestra, The Netanya-Kibbutz Chamber Orchestra, and the Tel-Aviv Soloists Ensemble.

Knaani is a scholarship recipient of the America-Israel Cultural Foundation and the IPO foundation. He performed in tours throughout Europe, China and the USA, including a concert in AIPAC policy conference in Washington D.C.
He took part in various music courses and festivals, such as “Astona International-summer music academy”, “Keshet Eilon master course”, “Jerusalem Music Festival”, “Zeist music days”, “Kol HaMusica chamber music festival”, “Garda lake music festival” and “The Evolution of the String Quartet” at the Banff Centre.

From 2016-2019, Knaani was a member of GAYA string Quartet, Musethica Israel string quartet in residence and worked under the instruction of the Jerusalem quartet.

He performed and collaborated with some remarkable musicians such as Guy Braunstein, Roy Shiloah, Zvi Plesser, Hillel Zori, Avri Levitan, Saida Bar Lev and others. As an orchestra musician, Knaani consistently served as a principal cellist of both the Tel- Aviv and Jerusalem academy symphony orchestras, and played in different orchestras such as the Israel chamber orchestra, Shanghai international youth orchestra and the Israel young philharmonic orchestra. In between the years 2013-2016, Knaani served as an outstanding musician at the IDF. 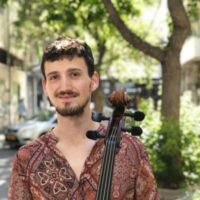