Gaya Feldheim Schorr is a vocalist, multi-instrumentalist, and photographer from Tel Aviv currently based in Brooklyn, New York.

'I Have Considered The Lilies' is Gaya’s vibrant re-imagination of the music of Connie Converse, an enigmatic singer-songwriter who left behind a staggering archive of music and texts after her disappearance in 1974. Alongside a group of cult-favorite Brooklynite collaborators including Grey Mcmurray (guitar), Tal Yahalom (guitar), and Eva Lawitts (bass), Gaya invites the listener into the intimate world of Converse’s songs, poems, and ontological wrestlings with equal doses of warmth and melancholy.

Gaya is an active member in bands/projects led by Adam O’Farrill (Bird Blown Out Of Latitude), Florian Herzog (Moon Tree), Blake Opper (The Questionable Solution), Lisa Hoppe (various), and Almog Sharvit (5tet).
As a photographer, she has become a first call in the New York jazz & improvised music community. Her work has been published in Downbeat Magazine, Pitchfork, IMPOSE Magazine, Cliche Magazine and Ha’aretz Newspaper (Israel) to name a few. 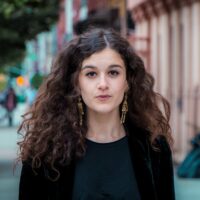