Ghiora Aharoni founded his multi-disciplinary studio for art and design in New York City in 2004, and his work has been exhibited internationally in museums, institutions and galleries. A graduate of Yale University, Aharoni’s work is in the permanent collection of The Pompidou Center, The Metropolitan Museum of Art, The Vatican, The Kiran Nadar Museum of Art, The National Gallery of Art in Washington D.C., The Morgan Library & Museum and The Beit Hatfutsot Museum in Tel Aviv—as well as numerous private collections in North America, Europe and India.

In 2020, Aharoni was the Artist-in-Residence at the India Art Fair, where he also exhibited an installation exploring intercultural coexistence. And, his work was exhibited in the 2020-21 Asia Society Triennial in New York.

In 2019, Aharoni’s sculpture, The Tablets, became part of The Vatican’s permanent collection, and was installed in November in The Vatican Library. From March through August 2019, his sculptures were on view at the Jewish Historical Museum in Amsterdam in the exhibition Kabbalah: The Art of Jewish Mysticism. In February 2019 he was invited to present a solo artist project at the India Art Fair in New Delhi that explored cultural interconnectivity via sculptures and works on paper, some of which included Hindru© (a phrase-based melding of Hindi and Urdu he created in 2016).

In 2018, his work was exhibited at the Jewish Museum in Vienna, Austria, and from November 2017 through October 2018, Aharoni’s solo exhibition, The Road to Sanchi, was on view at the Rubin Museum in New York. Earlier in 2018, his work was exhibited in New Traditions: Influences & Inspirations in Indian Textiles, 1947-2017 at the Museum Galleries of the Jawahar Kala Kendra (JKK) in Jaipur, India; his sculptures were shown in the exhibition Collapse: Climate, Cities & Cultureat New York University’s Gallatin Galleries; and in 2017, his work was selected for the Jerusalem Biennale.

Aharoni’s artworks are characterized by engaging time and text as a medium, and an interest in exploring dualities, such as the intersection of religion and science, and the intertwined relationships of seemingly disparate cultures. Much of his work involves traditional objects or symbols—such as cultural artifacts or sacred texts—that have been recontextualized and imbued with meaning that asks the viewer to question or reconsider their conventional social/cultural significance.

Aharoni’s solo museum exhibition, Missives, opened the fall 2013 season at the Dr. Bhau Daji Lad Museum (formerly The Victoria & Albert Museum) in Mumbai, India. In 2016 in conjunction with the Biennale, two of his sculptures were exhibited in Divided Waters, a group exhibition of international contemporary art at the Palazzo Fontana in Venice, Italy, commemorating the 500th anniversary of the founding of the Jewish Ghetto in Venice. In the spring of 2016, Aharoni was commissioned to create a public art installation—a series of stainless steel sculptures of Hebrabic/Arabrew© (a combination of Hebrew and Arabic that he conceived in 1999 while at Yale)—at the New York Live Arts Performance Center in Chelsea.

Since establishing his studio, Aharoni has also designed many residential and commercial projects in New York—ranging from the DeKooning residence and a duplex penthouse in a landmark building in the West Village to the New York headquarters of HCL, a multinational tech firm, in Rockefeller Plaza and the offices of an art law firm in a landmark building on 57th Street.

Aharoni’s work has been published internationally in books—including The Word is Art from Thames & Hudson—as well as newspapers, journals and magazines including The New York Times, The New York Times Magazine, Elle Decor U.K., L’Architecture d’Aujourd’hui, Architectural Digest Spain, Art India, IDEAT, Elle Decor Italia and New York Magazine. His essay proposing the displacement of Jerusalem's monuments was included in the book The Next Jerusalem.

Prior to opening his own studio, Aharoni worked at several distinguished architectural firms including Polshek Partnership [now known as Ennead Architects] and Studio Daniel Libeskind. While at Polshek Partnership, he worked on the design for Carnegie Hall’s Zankel Hall; the space planning and design of The American Museum of Natural History’s subterranean entrance and public spaces; as well as the space planning of The New York Botanical Garden’s Museum Building.

His design work for Studio Daniel Libeskind included the competition submission for The Ground Zero World Trade Center Design Study, and the façade design for Hyundai Development Company, Seoul, Korea. In addition, Aharoni was on the winning design competition team with Zaha Hadid and Arata Isozaki for the building and urban planning of Milan, Italy's Fiera Convention Center. 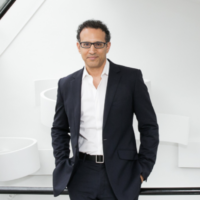