Gidon Agaza is a photographer, an artist and documentarist. Member of the "Beta Israel" (Ethiopian Jewish) community. He was born in Gonder, Ethiopia in 1984 and repatriated ("Aliyah") with his family to Israel in 1996. Gidon holds a B.F.A from the Bezalel Academy of Arts and Design.

Gidon set a major goal of using the tool of photography in order to promote the preservation and commemoration of the unique Ethiopian-Jewish heritage, as well as to document the daily lives, the struggles, the hopes and dreams of the community members in contemporary Israeli society. He believes that art should be available and approachable to the Beta Israel community and to society in general. Hence, it is very important for Gidon to present his works both in official art galleries as well as in community centers and schools.

2008 – 2012: B.F.A. in Artistic Photography, the Bezalel Academy of Arts and Design, Jerusalem, Israel. During the studies took many courses in drawing, sculpture, design, design software and more.

2015: "Memory, Near and Far", The Eretz Israel Museum, Tel Aviv, Israel. Photographs depicting changes and continuation in the "Sigd" tradition, a unique ceremony of the Beta Israel community.

2012: "The Sigd Ceremony, Then and Now". The JCC Gallery, Rhode Island, U.S. Curators: Shai Afsai and Matan Graff. Also presented in Washington D.C. and other places.

2011: "I Can Also Do It". Kiryat Moshe community center, Rehovot, Israel. A group exhibition of artists from the Beta Israel community, taking place in a local community center. The purpose: to get the community involved with art and get inspired by it. Initiator and curator: Gidon Agaze.

2009: Exhibition about Repatriation ("Aliyah") and absorption in Israeli society by a group of repatriate ("Olim") photographers. Beck Center, Jerusalem, Israel. 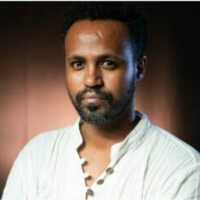