Gil Barak was born in Petach-Tikva, Israel in 1996 and plays the French Horn for over 10 years. Gil studied six years at the Municipal Conservatory in Petah Tikva, at Avraham Liran’s class, and then after at the Israel Conservatory of Music, Tel-Aviv (Shtiker), at Alon Reuven’s class. Gil served her duty at the IDF (Israeli Defense Forces) as an excellent musician. In parallel, she started learning at the Buchmann-Mehta School of Music at Tel-Aviv University, In Alon Reuven’s class.

Between 2012-2014, Gil participated at the training held by the Israeli Young Philharmonic Orchestra, and the National Israel Youth Wind Orchestra.

Since 2012, Gil won the America-Israel Cultural Foundation scholarships and was invited to play a recital at the Israeli Music Conservatory (Shtriker) and at Beer-Seeba Heichal Hatarbut. She also won the 2nd prize at the annual competition of the Buchmann-Mehta school of music.

Gil was invited to play with Tel-Aviv Soloists Ensemble, with the Israeli Philharmonic Orchestra, with The Israel Netanya Kibbutz Orchestra and Meitar Ensemble. On August 2016 Gil participated at the summer tour of the West-Eastern DIVAN Orchestra, conducted by Maestro Daniel Barenboim.

Today, Gil lives in Berlin, she studied at the Barenboim-Said Music Academy, at Radek Baborak’s class. 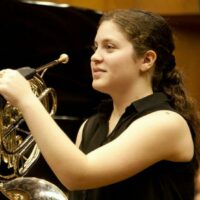