Praised by the 2010 Israeli Prime Minister Award Committee for “creating a personal language fusion that has a unique dimension” in music that is “fascinating, vibrant and drawing the ear as well as the heart,” Israeli musician Gilad Cohen (b. 1980) is an active composer, performer, and theorist in various musical genres including concert music, rock and music for theatre.

Gilad has received commissions from ASCAP, the Society of Composers Inc., Barlow Endowment, Concert Artists Guild, Houston Arts Alliance and the Jerusalem Music Center, and his music was recorded released on Alabany Records and Naxos/Delos by artists such as Nadav Lev and Richard Zimdars.
Honors include the 2016 Barlow Prize from Barlow Endowment for Music Composition, the Israeli Prime Minister Award for Composers, Whiting Fellowship for Humanities, The Encore Grant of the American Composers Forum, and the top prizes in the 1st Lin Yao Ji International Competition for Composition (Beijing), the 2012 Franz Josef Reinl Composition Contest (Vienna), the 2013 International Lycia Guitar Days Composition Competition (Turkey), the 2014 Zvi Zeitlin Memorial International Composer’s Competition, the 50th anniversary International Composer Competition of the American Harp Society in Dallas, and the 2010 International Bicentennial Composition Competition of the American Liszt Society. Music that Gilad wrote for his rock band Double Space and modern-klezmer ensemble was awarded the Outstanding Achievement in Songwriting Award in the 11th Annual Great American Song Contest and was a finalist at the John Lennon Songwriting Contest. Double Space’s debut album received rave reviews, was included in Israel’s Radio 106FM’s Best Israeli Albums of the Decade list, and was called by Jassi's Records publisher and critic Adam Baruch “probably the most significant piece of music recorded in this country in the last decade…”

Gilad’s research about structure in the music of Pink Floyd has resulted in articles published by Music Theory Online, Resling Publishing House and The Conversation, lectures in the US and Israel, a 4-credit course at Ramapo College, and the first-ever academic conference devoted to Pink Floyd that Gilad initiated and co-produced in 2014 at Princeton University together with composer Dave Molk. As a performing musician, Gilad has played piano, bass guitar and guitar with various ensembles at venues in the US, Canada, Mexico and Israel including New York’s Merkin Hall, Jazz at Lincoln Center and Symphony Space. An occasional choral conductor and music director of musicals, Gilad was invited to conduct his choral arrangements on occasions such as the Zimriya World Assembly of Choirs in Israel, the Anniversary of Braca Baruh Choir at Kolarac hall (Belgrade), the Jewish Theological Seminary (New York) and the Voice of the Music Festival in Kfar Blum (Israel).

An Assistant Professor of Music at Ramapo College of New Jersey, Gilad holds a Ph.D. in composition from Princeton University, and he is a graduate of Mannes College of Music, the Jerusalem Academy of Music and Dance and the BMI Lehman Engel Musical Theatre Workshop. Among his principal teachers were Robert Cuckson, Steven Mackey and Paul Lansky. 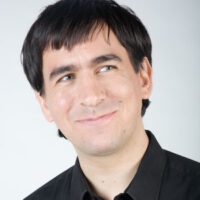