Gilad Hesseg has been making a new musical genre combining his two loves – 70’s rock and a passion for classic poetry – ranging from the David’s Lament to the twentieth century works of Edgar Allen Poe, Hemmingway, and other classic poets from centuries in between. His video of Annabel Lee is a YouTube favorite. The net effect is quite remarkable; with Gilad’s brilliant compositions and exquisitely produced arrangements, the poetic lyrics seem to have been written specifically for his music.

International enthusiasm among a broad demographic of listeners from fifteen to fifty is on the rise and gaining momentum. The Hidden Flame smoldering throughout this recording, unifying each diverse selection, is love… of family, as in Brother, a song written by his own brother, Tommer, devastated by the abduction and disappearance of a dear friend; the touching sincerity of knowledge and wisdom passed down from father to son in Kipling’s If; of one true love, Annabel Lee, a love so deep it transcends even death; The Hidden Flame, forewarning the fire of hidden love that doesn’t come together is even more powerful; Beggar Maid – you’ve got to love a Cinderella story; The First Day, remembering the small things in love over time; Happy the Man, urging us to love today to be happy tomorrow; of a child in Advice to a Son, Hemmingway’s ingenious exposé of life’s raw truths; Deceived, the heartache of love lost by betrayal; David's Lament, the love and friendship of two men; and Farewell, the sadness of love gone wrong and the pain that yet endures.Gilad’s Dublin-born mother, a concert pianist, had him study classical piano at age five.

As a kid he was always singing or playing the guitar, but never finished a song from beginning to end. He learned guitar by ear and at twelve studied with an alternative piano teacher in a group setting. Fifteen years later, his first album was dedicated to her poetry and the impetus for his distinctive genre style was born.

After the army, Gilad’s Tel-Aviv University professor wanted him to write music for four voices. His lack of understanding music theory was a stumbling block. The solution – studying theory with a fourteen-year-old prodigy to finally understand composition. Now there was no stopping him. He started a rock band, playing mostly cover tunes. Though he lived on stage almost every night and weekend for thirteen years, he never thought of turning pro.

Influenced by his brother, a conductor, he wrote a musical play, On the Red Sofa, based on Rachael’s poetry. His brother’s theater manager was the first to give Gilad a break. This show played over a period of six years, using students as dancers, singers, and actors. By then, Rachael was revered as the top poet of Israel.

In 2001, he was selected by the Israel National Music Festival to perform one song on Prime Time TV. His song received daily airplay for one month on national radio. This publicity solidified his recognition as a noteworthy composer.

In 2007, choir conductor Stanley Sperber commissioned Gilad to write a new work for his choir. Gilad was captivated. The words of Poe’s Annabel Lee immediately came to him, and he wrote all the music in twenty minutes. Later, Maestro Richard Coffey Artistic Director and Conductor of Connecticut’s Concora Choir, was very impressed by the composition and added it to the choir's repertoire Sperber commissioned yet a second piece by Gilad resulting in a choral version of David’s Lament.

Being a passionate athlete and pro-basketball player-led Gilad to his first postgraduate degree in physical education. In 2005, he completed his second degree in political science, majored in internal auditing and now works for an Israeli municipality by day, and is a musician by night. His management and production association with Suzi Reynolds & Associates, LLC began when Jamie Fay, a member of that firm, moved to Israel and discovered Gilad.

Though he’d already completed Annabel Lee and David’s Lament, he did not yet have an album concept. His work with Jamie gave him confidence and Suzi supplied the production guidance to help him complete Hidden Flame. He began collecting material for the album by ordering classic poetry books online. The poems spanned from BC to the 20th century, and he chose those that spoke to him on an intimate level at first reading. The creative muse was with him, and he determined to work day and night to complete his mission. His muse was his deceased Polish-born father, a painter, and sculptor who taught industrial arts and spent all his free time working on original pieces, yearning for the day when he could devote all his time to his art.

Sadly, within a year of his retirement, he was diagnosed with cancer and passed away in 1999. This dramatic event still propels Gilad to pursue his passion full-heartedly. The poems fuel the fire for his music, which comes easily to him as fully orchestrated pieces. 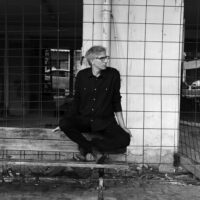