Gili Levin was raised in Haifa. It is safe to say creativity and artistic passions are in her blood. Her father is a mechanical engineer and jeweler and her mother is a pianist and artist.
Gili is the youngest of three siblings, Ruth and Dan, both of whom she is close with. Ruth works in film and production, while simultaneously being a fulltime job mother. Her big brother Dan is a programmer and phone application designer.

From an early age, she developed a great deal of love and passion for all artistic pursuits, and unsurprisingly, she connected to this creativity. While attending junior-high school at the Reut School of Arts in Haifa, her passion and skill developed through various courses including textile design, jewelry making, drawing, web printing and sewing, to name a few.
She attended high school at the WIZO Academy of Design and Education in Haifa while pursuing her creative and artistic passion. There, she developed special interest in photography. Before enlisting in the Israeli military as a social worker, she achieved eleven units in photography on the Israeli high school standardized testing scale.

In 2011, Gili completed her mandatory army service and moved to Tel Aviv. Barely acquainted with the city, she already knew she wanted to start studying and discovering the designer inside of me. In 2015, she began studying at the Minshar School of Art in the Visual Communication Department. During the duration of her studies, she worked as a designer in Studio AAA working on numerous projects, including one titled “A Objects.” In her third year of studies, she moved to the branding studio ‘Gorillot’, where she worked as a designer. She did not only gain experience at the studio, but also learned new techniques and methods from the talented staff.

Under the guidance of her wonderful lecturer Meir Sadan, she presented her final project entitled “Inner Voice” which explores feminine power and self-reflection. The exhibition lasted roughly a month following its opening on July 17, 2019. After its completion, she was invited to present the project at the “Dimensions” exhibition hosted at the ‘Cuckoo Nest’ in Jaffa, where it is currently still on display. In her spare time, she loves to explore the fine line between design and art, play the drums, design album covers for local artists, travel with her dog Roger, and play Frisbee at the beach.

Currently, she works as a freelance graphic designer while simultaneously exploring the exciting field of design. In the near future, she wishes to open a design studio of her own. Despite her dream of opening her own studio, she wants to continue pushing herself academically, and eventually pursue a master’s degree in curation/design. For her, this is an integral part of personal and professional development.

Gili is honored the America-Israel Cultural Foundation recognised her talent as a designer, and she is proud and thankful to receive such a prestigious scholarship. she has no doubt that beyond the financial contribution, the scholarship will empower and validate her artistic and developmental journey as a designer. 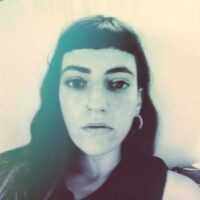