Hagai Perets was born in Haifa, Israel in 1981.

He started learning about music and began taking guitar lessons at the age of 13 in his hometown, Kiryat Ata. There, he went to the local conservatory from 1993 until 1999 and played for the representative Jazz ensemble, in which he performed frequently at a number of places in Israel and the US.

After studying Electronics in Rogozin high school, Hagai served in the Israeli army as an engineer in the Air force for 3 years from 2000 to 2003 as a part of his duty to the country. Once he was done with the military service, Hagai started establishing his music career by playing with several groups and performing all over the country. In addition to performing, Hagai gave guitar lessons in Haifa-Nesher and Yaqneam Conservatories.

In 2007 he started his higher academic education at Haifa University, majoring in Music and Archeology. During his studies he participated in the Asia Scholarship live audition tour for Berklee College of Music and was accepted as a scholarship student. Shortly after, he moved to Boston in 2010 and began his studies in Berklee College.

Perets graduated from the class of 2012 with the “summa cum laude” Bachelor of Music degree. He also managed to get the Guitar Department Award in 2012 and was on the Dean’s list for an excellent academic performance during every semester he was enrolled. Hagai studied and collaborated with some of the top musicians and educators in the Boston area such as Mick Goodrick, Bret Willmott, Tim Miller, Greg Hopkins, Ed Tomassi, Marc Rossi, Mitch Haupers, Dave Johnson and Tibor Pustzai to name a few. Hagai was one of the first Israelis to be featured in the colleges’ prestigious and annually held, “Jazz Blues Guitar Night” at the Berklee Performance Center for two years in a row, performing “Ga’aguim” and “Desert Nights” in Fall 2010 and “Independent Shadow” in Fall 2011. Hagai is also a JRR (Jazz Revelation Records) artist, his composition, “Ga’aguim”, was selected for JRR – Octave album, which was released in 2011.

Currently located in Boston, Hagai is writing, arranging, recording and performing his music as a bandleader with his own group and as a sideman in various projects. Moreover he is guiding a local Jazz ensemble and giving guitar/music lessons via Skype or in person within the Boston area. Aside from teaching, Hagai is in the progress of publishing his own Guitar book, which showcases and informs the readers of his approach for improvisation and composition. 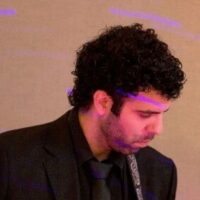