Abramowitz studied art at Syracuse University School of Fine and Applied Arts in 1972; she received a BSFS (1976) at Georgetown University and a JD from the University of Maryland (1979) while continuing art studies. In Israel, she studied with Jan Rauchwerger, Sasha Okun, and was in the first Master Class of Israel Hershberg’s Jerusalem Studio School.
She has served on the Jerusalem Artists’ House Managing Committee and is a founding and current member of the Studio of Her Own Steering Committee.

2019 Embroidered Scaffolds: Between Past and Present, Between Art and Craft, Hansen House Center for Design, Media and Technology, Jerusalem, catalog

Honors: Abramowitz was selected to participate in 2021 in the “48-Hour Creative Quarantine” artist resident, Kol HaOt Gallery, Artists Colony (Khutzot Hayotzer), Jerusalem, where she previously completed a one-month artist-in-residency in 2017. A finalist in the International Jewish Artist of the Year Award in London, 2007, her work was exhibited at Christie’s, London. In 2004, she was an International Fellow at the Vermont Studio Center. Her work is included in the Permanent Collection of the Hebrew University of Jerusalem, Omanut l’Am, and in many private collections in Israel and abroad. 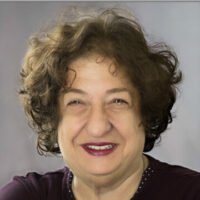