Hilla Ben Ari (born 1972, Yagur) is a multidisciplinary artist based in Tel Aviv.
Her work spans a variety of media such as video, installation, sculpture, and print. The female body as a crossroads of political, social and cultural contexts is at the core of her work.

Ben Ari graduated from the Ceramics Department, Bezalel Academy of Art and Design, Jerusalem (1999) and has a Master’s Degree in Poetics and Comparative Literature from Tel Aviv University (2006).

Her works are part of the collections of The Israel Museum, Jerusalem; the Tel Aviv Museum of Art; the Petach Tikva Museum of Art, the Bundestag, Berlin, and other public and private collections. 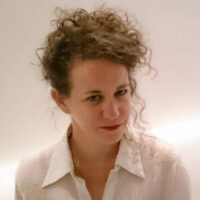