In parallel to the performance studies, Inbar is a researcher in the field of Music Cognition, in the framework of M.A. in Musicology at Tel Aviv University, where she also completed B.A. in Psychology. Inbar has won excellence scholarships throughout her studies, from the German Koehler-Kast foundation, the America- Israel Cultural Foundation, Bnei Brit and the Buchmann- Mehta Music Academy.

In addition to her activity as a performer of early music, Inbar enjoys performing Israeli and international contemporary music. She collaborates with composers from Israel, USA, England and Argentina, and in the past year numerous new pieces were dedicated to her. She played at the annual concert of the Israeli Women Composers Forum, where she premiered five pieces. She was a guest of the Israeli national classical radio station, “Kol Hamusica”, in numerous programs dedicated to her recordings.

Inbar participated in festivals in Israel and abroad, among them the International Organ Week, Early Music Days and Contemporary Music 013 in Germany as well as the Israeli Music Festivities and the Yehiam Renaissance Festival in Israel. She was a finalist at the International Israeli Music Competition in London and won the Contemporary Music Performance Competition at the Buchmann-Mehta School of Music. She played as a soloist with the Israeli Stage Orchestra, recorded TV performances in Germany and Israel, and participated in the recordings of the opera Cain and Abel (Fleischer).

Inbar guides Recorder teachers as a part of Karev Foundation’s teachers education program (Ministry of education). In addition, she teaches Recorder at the Rehovot Conservatory, where she studied in her youth. 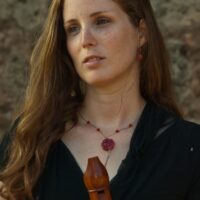