Irena was born in Belarus (Minsk), where she received professional musical education starting from music school to the Academy of Sciences as an ethnomusicologist and ethno singer. Since 1999, she has been going on ethnographic expeditions around Belarus where she collects folklore, publishes scientific works, teaches students and pupils.

Graduate School:
Institute of Art History, Ethnography and Folklore of the National Academy of Sciences of the Republic of Belarus. Specializing in musical art.
Research topic: "Song of the native rite: function, typology, ranges of song-melodic types."

Author of the scientific publication: the problems of authentic folklore, archaic rites of Belarus, styles and genres of ethnographic song culture.

Since 2006, Irena is the author and leader of projects «Ethno-NHS», «Akana-NHS»; She does vocals and arrangements of projects Kazalpin (Belarus-Switzerland) and Diagilew Project & Akana-NHS (Germany -Belarus); vocals and the concept of the duet AGATA and the of WARSOBA group (Israel-Belarus). As the author, composer and soloist, Irena produces the project "Ethno Fantasia" with the State Chamber Choir of Belarus.

Diploma from the Euro Union for contribution to development ethnic legacy of the Belarus-Poland cross-border area (Belarus, Grodno, August 2013).

The author of the methodology in the field of art therapy "Folk therapy" in working with children with disabilities, the program received a grant for 2018 from the Embassy (Consular Office) of Switzerland in Belarus.

Gratitude from the Ministry of Culture of the Republic of Belarus for the revival and preservation of traditions in 2019. 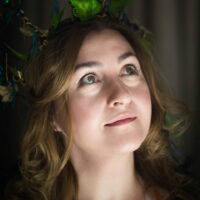