Jonathan Aner has performed as a soloist with Israel’s leading orchestras, including the Israel Philharmonic Orchestra under Zubin Mehta. Further engagements as a soloist followed in Germany (Berliner Philharmonie), Italy and China, where he recently performed at the closing concert of the NCPA (National Centre for the Performing Arts) May Festival. He has won international prizes at the Città di Senigallia International Piano Competition in Italy, the International Schubert Competition and the Ben-Haim Competition.

Described as “a chamber musician par excellence” (Frankfurter Rundschau) Jonathan Aner is a member of the Brillaner Duo with clarinetist Shirley Brill and of the Oberon Trio. He has collaborated with such leading artists as Tenors Ian Bostridge and Christoph Prégardien, violist Tabea Zimmermann, the concertmasters of the Berliner Philharmoniker and with the Vogler and the Ariel String Quartets. As a former member of the Tel Aviv Trio, he has won prizes at the Melbourne International Chamber Music Competition in Australia, the Città di Trapani and the Vittorio Gui International Chamber Music Competitions in Italy, the Joseph Joachim and the “Erst-Klassik” Competitions in Germany, and the European Chamber Music Competition in France.

Mr. Aner performed recitals and chamber music concerts in such prestigious concert halls as the Berliner Konzerthaus, Carnegie Hall, Auditorium du Louvre in Paris, Kennedy Center in Washington, D.C., Wallace Collection in London, Conde Duque in Madrid, Dom Muzyki in Moscow, Tivoli Hall in Copenhagen, as well as in Asia, Australia and in his native Israel. He has taken part in the Bergen, Schleswig-Holstein, Rheingau, Heidelberg and Radio France Festivals. In addition, he has participated in the Deutsche Grammophon’s “Yellow Lounge”. Mr. Aner is a graduate of the Musikhochschule Hannover where he studied with Professor Arie Vardi, of the Musikhochschule Lübeck as a student of Professor Konrad Elser and of the New England Conservatory in Boston. Since 2010 Jonathan Aner is a professor of chamber music at the Academy of Music Hanns Eisler in Berlin. 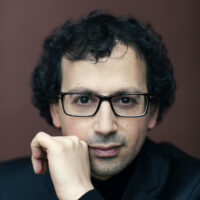