sraeli born conductor and arranger Jonathan Spandorf is a passionate and dedicated musician for orchestral repertoire. He has conducted orchestras such as the Israel Camerata Jerusalem, Haifa Symphony Orchestra, Israel Chamber Orchestra, Symphonette Ra'anana, the Mendi Rodan Symphony Orchestra and The Juilliard Orchestra. Recently, he coached and conducted Donzetti’s Le convenienze ed inconvenienze teatrali at the International Masterclass for Vocal Arts in Jerusalem.

Jonathan began his life long passion for classical music as a horn player at his high school, Thelma Yellin High School of Arts where his curiosity led him to discover the symphonic repertoire. The importance of educating young people to discover classical music through playing in an orchestra has shaped his work ever since. From 2011-13, Jonathan served as the chief conductor of the Young Maestro Chamber Orchestra in Israel, a program founded by the Maestro Foundation and Israel Chamber Orchestra, which works primarily with underserved communities, and as music director of the Lincoln Center Chamber Orchestra at Fordham University in New York in 2015-16. Jonathan’s own experiences as an orchestral player contributes significantly to his understanding of orchestral music making.

Jonathan is also a devoted educator. The understanding of complex theoretical and musical concepts helped him secure a Teaching Fellowship in the musci theories departments of The Jacobs School of Music and The Juilliard School. Recently, Jonathan recieved the Wennerstorm Fellowship Teaching award of the Jacobs School of Music Theory Department for excellence and his contribution for teaching. He has also taught ear training and music theory at both The Jacobs and Juilliard School’s pre-college departments. In addition, Jonathan volunteers with children of asylum seekers in Israel at Unitaf organization around Tel Aviv. Jonathan shows and performs both classical music and Israeli pop tunes in order to create enthusiasm and expose young audiences to classical music.

Deep interest in the mechanics of orchestral music led Jonathan to explore composition and arranging himself. His works have been performed by the Jerusalem Symphony Orchestra, the Israeli Sinfonietta Beer Sheva, the Mendi Rodan Symphony Orchestra, and various chamber ensembles, both in Israel and the U.S

Master conductors from all over the world have influenced his perspective, including Maestro Bernard Haitink at the Lucerne Festival, Christopher Seaman at the David Zinman master class in Zurich, Gianluigi Gelmetti in Accademia Musicale Chigiana in Siena and John Nelson and Asher Fisch at the Jerusalem Academy of Music and Dance. In 2011 Jonathan won the Honorable Mention category in the Yuri Ahronovitch Conducting Competition during Aviv Competitions for Young Israeli Musicians (the only prize awarded). In 2015 he was an invited participant in the Malko Conducting Competition where he conducted the Danish National Symphony Orchestra.

Jonathan Spandorf graduated with honors from the Jerusalem Academy of Music and Dance. Among his teachers were Avner Biron, Doron Salomon and Eitan Globerson. He earned his Master of Music degree from The Juilliard School degree under the guidance of Alan Gilbert, where he won the Charles Schiff conducting award for his achievements. He is a recipient of the Bruno Walter Memorial Scholarship and has repeatedly received America-Israel Cultural Foundation scholarships. Currently he is studying towards his doctorate in conducting at the Indiana University Jacobs School of Music under the guidance of Arthur Fagen and David Neely.

Currently, Jonathan lives with his wife Klil and their daugter Toam in Israel. He is a nature lover. He has hiked and climbed mountains in the Himalaya, Andes, Alps, Pyrenees and in Israel as well as in the U.S where he currently resides. 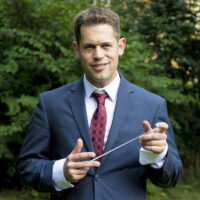