Lavih Serfaty is a multicultural artist. He was born in 1945 in Casablanca, Morocco. He is a graduate of the Bezalel Academy of Arts and Design, Jerusalem.

At the age of 11, Lavih immigrated with his family to Israel, carrying with him memories of Morocco. His homeland’s and their vivid coloration. Later in life, these memories found their way into his art. He engages in museum and exhibition design, painting, and sculpture.

His latest works are on canvas, paper and aluminum. The painting are in acrylic and water color.

The use of bright and mono color is a result of a deep learning and understanding the power of the colors as it’s affect people.

The color can change the atmosphere of the environment, can heal our soul. The use of the right color in the right place can bring new and pure energy in spaces …”I use the theories of color therapy, Feng Shui and Chakra energy in my painting.The idea of making those painting is a result of long period of meditation and listening to music. Then I decided to paint with just one color according to state of mood I am, after I meditate”… The aluminum is folded before I put the color on. When the painting is hanging on the wall, the color change as the light is changing during the day, the shade accentuate the color and change them to deep, darker or lighter. It’s fill the room with bright and clear energy.The colors I choose are from the Chakras colors, so every one who choose a painting can take the color he likes most”.

Lines have an important role in Serfaty’s aquarelles. They regulate the space, define its components, and at the same time differentiate among them. The lines also accumulate into topographical textures that vary in their density and direction according to the depicted area. Thus earth is usually characterized by a highly dense rhythm, while the sky, comprising spaced lines, is perceived as a fresh, spiritual environment. In addition, the morphological rhythm of the lines conveys a feeling of movement that seems to be inherent to Nature itself. The rocks, dunes, sky, and earth are not static, displaying a constant process of formation and development. Therefore, even in the absence of a stated narrative, the aquarelles present a dramatic occurrence anchored in the realm of Nature. Soil, Land, Territory. In a country where these words are a source of recurring conflicts, landscapes usually become dreamed places, sanctuaries actually. Painted on the borders of Israel, Serfaty’s aquarelles depict the richness of colors under a Mediterranean sun. Indeed, a painful, silent testimony echoes in the red, blazing rocks of Edom Mountains or in the scattered houses in Village on the rocks. “…Borders are human inventions that artificially split the Nature’s flow. Standing on one side of the border, I could feel the magic, healing intangibility of Nature on the other side. Landscapes became accessible to my eyes and imagination in their entirety. When I painted the villages of Lebanon and the West Bank, I could encompass both sides and reconcile between them…”.

March 2016 – The GreenHouse Gallery in the Tel Aviv University 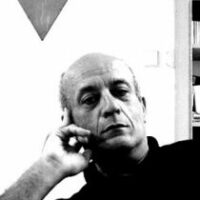