Lia Chen Perlov was born in Israel in 1994. She started playing the cello at the age of 9 at the Israeli Conservatory of Music. Among her previous teachers- Mr. Zvi Plesser, Prof. Hillel Zori, Prof. Tilmann Wick and nowadays Prof. Troels Svane in Lübeck MusikHochschule for her Bachelor degree.

Her recitals took place in the Tel-Aviv Opera House (which received warm reactions from the press such as “a musical surprise was the performance of the young Israeli cellist Lia Chen Perlov, a virtuosic performance that was full of sensitivity and expression”) , The Bach Kirche (church)-Germany, Lübeck Musik Hochschule chamber music hall, Felicja Blumenthal Hall, The Israeli Conservatory, The JMC – Jerusalem Music Center, the Buchmann-Mehta Academy Of Music, and at the Perugia Music Festival. Lia has played concerts in Israel, USA, France, Germany, Italy, Switzerland, Holland and more.

Lia also played a several times in The Israeli Classical Music Radio Station-”Kol Hamusica” as a chamber musician and as a principal player in orchestras.

In March 2016, Lia won the first prize of the Paul Ben-Haim competition. In 2012 she won the first prize of The Israeli Conservatory Competition, the Turgeman Competition, and The Kol-Hamusica Competition- The Competition of the Israeli Classical Music Radio Station. Recently, she received a special Prize from “The Kiwanis Club”, which was followed by a recital in Lübeck. She also received a scholarship for her studies in the year 2015-2016 from the “Possehl” Foundation in Germany. Since 2005, Lia has received annual grants from the American-Israel Cultural Foundation. She is supported by the Lübeck MusikHochschule Foundation, the Rothschild Foundation, the Ronen Foundation, and was given a full scholarship by the Buchmann-Mehta Academy Of Music.

Lia was a member of the Jerusalem Music Center, and as a cellist in the music center she is invited to play and perform in a various chamber groups. 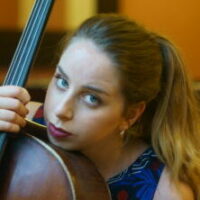