Liron kaniel was born in Israel in 2002.
She began studying the viola at age 10 (had never played the violin ever before) and studied with the teacher Leonid Rosenberg and with Dr. Lilach Levanon.
Since 2021, Liron has been studying with the violist Matan Noussimovitch at the Buchmann-Mehta School Of Music.

Liron has been playing various chamber ensembles for several years and performed with them in Israel and abroad.
She took part in various music festivals around the world such as the 7th International Mendelssohn Festival (IMF) in Hamburg, “ISA” masterclasses of the MDW, She performed with the Eilat Chamber Orchestra in Moscow (and received a gold and silver medal for the performance), the 8th International Youth Music Festival in Bratislava, the "Red Sea Chamber Music Festival" for few years as a soloist, in chamber ensembles and as a member in chamber orchestras.
In 2018 she was specially invited to perform in a few concerts in Sopron (Hungary) as a soloist and as a member of several chamber ensembles.

She participated in Keshet Eilons’ spring seminars for Israelis string players for couple of years.

She participated in the "Jerusalem Music Center" programs for outstanding young musicians since summer of 2018, including the “Young Israel Philharmonic Orchestra”, in chamber music as a part of “David Goldman Chamber Music Program”, and the "Huberman project” for young Israeli soloists.

Liron served the IDF as an “outstanding musician”.

Liron is playing on a 1780 Gagliano viola, which is kindly lent to her from the collection of Yehuda Zisapel. 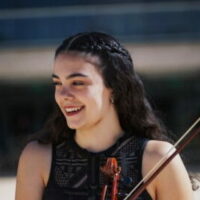