Margarita Timoshin enjoys a diversified career as a successful orchestral and chamber music performer, as well as being an in-demand contemporary music performer.

Following her love for music making, the Israeli-Estonian flautist studied at the Buchmann-Mehta school of Musik (Tel-Aviv University) with Eyal Ein-Habar, later at the Hochschule für Musik und Darstellende Kunst Frankfurt am Main, with Stephanie Winker and Ensemble Modern, and also at the Hochschule für Musik and Darstellende Kunst Stuttgart under the supervision of Professor Davide Formisano.

Margarita Timoshin has collaborated with orchestras such as the Kammerorchester Stuttgart, Badische Staatskapelle, Frankfurt Oper, Hamburger Symphoniker Laeiszhalle Orchester, Ensemble Modern Orchestra, Israel Symphony Orchestra, and, as a soloist, with the Israel Philharmonic Orchestra and the Israel Chamber Orchestra. She has held various positions at the Norddeutsche Philharmonie Rostock, Münchener Rundfunkorchester and Staatsoper Stuttgart.

She received numerous prizes including the first prize at the International Haifa Flute competition which also led to an invitation for a solo recital at the Convention Internationale de la Flûte in Paris, third prize at the Felix Mendelssohn Bartholdy Hochschulwettbewerb, François Schapira Prize and audience prize.

After playing as a regular substitute with the “Meitar” Ensemble, she decided to pursue her passion towards new music by joining the International Ensemble Modern Academy where she spent a year immersing herself in challenging and unconventional repertoire. During a live broadcast for the Israeli national radio she premiered “AirAria 2012”, a piece that the composer Dr. Hana Ajiashvili dedicated to her.

She is supported by the America-Israel foundation, DAAD-Stiftung, Toepfer Stiftung and the Gotthard Schierse Stiftung. 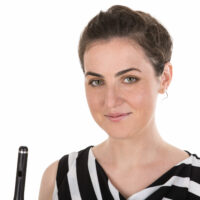