Noted equally for her brilliant performances of contemporary music and her deep understanding of the classics, Maya Hartman has been described as an “Elegant and poetic” pianist with “an extraordinary capacity for producing a beautiful sound” (New York Concert Review).

As a Pro Musicis Artist, she has played solo recitals in Weill Hall at Carnegie Hall, Salle Cortot in Paris and in Boston’s Pickman Hall.

She has also performed as soloist with orchestra and in solo and chamber music recitals at venues such as: Stern Auditorium at Carnegie Hall, Steinway Hall, Alice Tully Hall, Bargemusic, Merkin Hall and the Bruno Walter Auditorium in New York City, and on the Dame Myra Hess live television (TV 25) and radio (WFMT) broadcast series in Chicago.

Conductors she has collaborated with include Pierre Boulez, David Stern, Alan Dennis, and David Stock, among others. She has appeared at the Lucerne Festival (Switzerland), International Musicians Seminar in Prussia Cove (England), [email protected] (California), Yellow Barn Festival (Vermont) and Scotia Festival of Music (Halifax), and has been broadcast on National Public Radio and on WQXR.

A passionate advocate of the music of our time, Ms. Hartman has performed works by many composers of the 20th and 21st centuries including Elliott Carter, Oliver Knussen, Luciano Berio, György Ligeti, Arthur Berger, Pierre Boulez, Jonathan Harvey, David Cutler, David Fromm, and Noam Sivan, and has premiered many new works. On her performance of Milton Babbitt’s Three Compositions for Piano one reviewer noted:

"Hartman's performance … was a revelation. Generally speaking, Babbitt's scores are dense masses of extremely difficult writing. Polyphonic, polyrhythmic as well as non-tonal, in lesser hands they often deteriorate into panicky incoherence. In Ms. Hartman's confident embrace, however, they bloomed beautifully. I have rarely heard this kind of piano music played as well, with such attention to its detail, such clarity of the twisting strands, and such beauty of sound. This is exactly the kind of music that sends audiences fleeing on many occasions, but I defy anyone who was there to hear this performance not to have been entranced by it." (Timothy Gilligan)

Maya Hartman holds a Doctor of Musical Arts degree from SUNY-Stony Brook as well as bachelor’s and master’s degrees, with high distinction, from Indiana University. She is a recipient of the Theresa Sterne Grant, and also a prize winner in the National Federation of Music Clubs Young Artists Competition. Her principal teachers were Gilbert Kalish, Menahem Pressler, Leonard Hokanson and Edward Auer. She lives in Stuttgart Germany with her husband and three children. 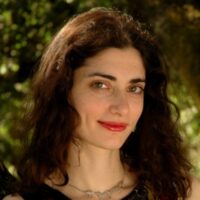