Michal Nachmany is a self-taught collage and mixed-media artist and educator based in New York City. Born in Jerusalem, she has lived in New York since the late 1980s. One of the central themes of Nachmany’s work is that ‘every person and every object has a journey.’ Her work focuses on the ways personal and cultural journeys are captured in memories and objects, with work that reimagines and repurposes found objects of daily life. As an immigrant from Israel to New York, she explores the journeys of people and their keepsakes from a personal perspective. Nachmany’s technique combines mixed media, including collage, printmaking, and sculptural installation, to sew together swatches of life through images, colors, and words.

Michal Nachmany Solo Shows: Selections:
2018
Beyond the Balcony II, New York City: Curated for the State of Israel’s 70th anniversary. Nachmany’s work offered viewers the opportunity to reflect and reminisce on how Israeli history and culture have evolved since the early 20th Century to the present.

Keep Away From Children, Krakow, Poland: The artist celebrates the 1930s journey of her father and grandfather from their hometown in Poland to their life in Israel.

2016
Journeys and Longings, Taipei, Taiwan: The artist transfers the universal theme of ‘Journeys and Longings,’ in an artistic celebration of art ‘as a bridge’ between cultures, and past and present. The show’s narrative, ‘Every Person and Every Object has a Journey,’ is a thread that captures the universality of aspiration across cultures – such as Taiwan and Israel – and offers an artistic link to the history of both countries.

Three Balconies and a Door, NYC’s Lower East Side: The show celebrated the multiple immigrant communities of New York.

Beyond the Balcony, NYC: This show captured Israel’s evolution of statehood—the unfolding of a vision embodied in Theodor Herzl’s lonely figure on a hotel balcony in Basel (1897) to its realization during the first half of the 20th century and to Israel’s independence in 1948 and onwards. The exhibit winds its way from the public to the personal with the final portion examining the emotional imprints of what it means to create a new life in a new land.

Albert’s Dream, NYC: Show was based on the experiences of the Youth Aliya, orphaned children arriving to Palestine after WWII, and later participating in the new State of Israel. 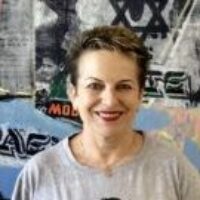