Sajrawy’s musical finesse is to reconcile the jazz of western culture with the “Maqamat” of the Middle East, he has perfectly developed a whole new sound that mends both, altogether his music takes you on a beautiful and divine journey.

“Maqamat” – these are oriental modes, rooted in ancient traditions, consisting of very special melodic lines based on quarter note steps – an exceptional musical vocabulary. Beyond this, each of these “Maqam“ has its very own ethos attributed to it, associating various and very different moods. For example, in the ninth century, Safi el-Din gave every hour of the day its own Maqam.

As a rule, oriental guitarists equip their instruments with additional frets to be able to create the quarter note steps necessary for “Maqamat”. Unfortunately, this inevitably leads to a lack of precision in the intonation:

Michel Sajrawy tackles this difficulty with his unconventional solution:

Having on the one hand tried out the limited suitability of additional frets, he nonetheless rejects the usual use of “fretless guitars”. They do offer complete freedom of intonation, but according to Sajrawy, can only be a compromise for the sound as well as the character. They just don’t do justice to the sound he really wants!

Sajrawy creates the desired quarter note steps by bending the strings. A very unusual, if not unique technique for interpreting “Maqamat”. It spices the original sound with an almost “bluesy” note and does not require any additional alterations to the instrument. All that can be heard is the virtuoso result of the ingenious interaction of fingers and ear.

Guitarist and composer Michel Sajrawy is from Nazareth – Israel. At the age of nine, he started taking guitar lessons. During the years 1990-1993, he studied for and received a diploma in electronic engineering. In 1995 he moved to London, England, where he studied and completed a one-year diploma at the Musicians’ Institute – G.I.T. He began a three-year degree program in music composition at The London College of Music in 1996 under the instruction and assistance of Adam Gorb.. During the years 1999-2000 Michel furthered himself with the assistance of Adam Gorb and Nigel Clark to complete his master's degree in film and TV scoring.

In 2000 he returned to Nazareth and established his own business Dasam Studio (Dasam is a word in Arabic for ”rich food”). As a bandleader, he released his debut album Yathrib (Ozella Music 2006) which marked his entrance into the vanguard of crossover artists who see themselves creating an uncompromising jazz sound between traditional and contemporary. In 2009 he released his second album, Writings On The Wall (Ozella Music) which marked a strong turning towards filigree west-eastern acoustic jazz. Among the jazz releases, the album became on the Top List “Best albums of 2009” of Freies Radio Stuttgart in Germany. In 2012 he released Arabop (Ozella Music / Dasam Studio) which was praised and criticized as high octane, modern Arabic music that isn’t like any world jazz or world fusion you’ve heard up till now.

Michel can easily join the ranks of seminal jazz guitarists. With his band, he played in different parts of the country, toured in Germany and played the Leipzig Jazz Festival (2006), played in Switzerland-Geneva (2007), Jerusalem Festival (2007) where he met and jammed with Nigel Kennedy. He played in the Netherlands (2008), the same year he played in New York (USA). Played the Jordan Festival (2009) and Tel Aviv Jazz Festival (2009). He played the International Oud Festival in Jerusalem (2012). In 2014 he was appointed as a guitar faculty for Spring Semester at Swarnabhoomi Academy of Music (SAM) in India where he shared the stage with Prasanna Ramaswamy, Tom Brislin (Yes/Meatloaf/Robert Plant/Spiraling), Phil Maturano, and Steve Zerlin (Dennis Chambers, Carl Filipiak, Jack DeJohnette). In 2014 he performed with Yaron Herman in Paris (France). In 2015 he participated in Munich at the BMW Welt Jazz Award 2015 (Germany) and in 2016 he played at HevHet Festival in Kosice (Slovakia).

He worked with Abboud Abdel’All, Bashir Abdel’All, Ahmed Mukhtar, Samir Jubran, Manfred Leuchter, Mira Awad and Souad Massi. He composed music for several documentary films, arranged the music for theatre, various mini orchestral projects, produced radio jingles for the major brands in the country and he appears regularly as a musician on national TV shows. He collaborated on more than 20 albums worldwide. He is also a freelance guitarist and instructor.

Michel has been awarded the Wilfred Joseph Prize (1998-99 England), Best Title in Music (2002 Israel), the A. M. Qattan Foundation’s Performing Arts Grant for the year (2007 West Bank) and Diploma from “Master-Jam Fest” in recognition of musical skill and devotion to jazz art (2012 Odessa – Ukraine). 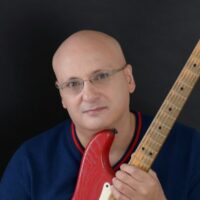