Mindia Khitarishvili is an Israeli and Georgian composer, music arranger, music producer and teacher, currently residing in Haifa, Israel. Originally from Batumi, Georgia, Khitarishvilli studied choir conducting, piano and music theory at the Musical College of Batumi from 1987-1991. Upon graduating from the program, he continued his studies at the Tbilisi State Conservatory and the Academy of Arts of Georgia where he studied Musicological-Composition from 1991-1996. His studies included composition with Professor, N.Mamisashvili. Since 1996, Khitarishvili worked at the Batumi Music College. He worked as a musical editor at Adjara TV.

Khitarishvilli is a member of the Union of Composers and Authors of Georgia. He is also a member of the Adjarian union, since 2001, and organizes theatrical productions in Georgia. From 2001, Khitarishvilli worked at the Batumi State Conservatory (State University of the Arts) where he introduced courses in polyphony, orchestration, musical instrument classification (organology), jazz harmony and improvisation. Since 2004, Khitarishvilli worked as an orchestral arrangement specialist for the Batumi State Music Center. From 1998-2012, he was a music producer and composer for the Batumi State Puppet Theatre for Young People. For his significant contribution to the development of Georgian theater arts, in 2003, he was awarded the honorary title of Honored Worker of Arts of the Autonomous Republic of Adjara. He has received numerous awards, prizes and international diplomas.

In 2012, Khitarishvilli relocated to Haifa, Israel, where he worked as a music producer for GTV television. Khitarishvili is a composer of Haifa Theatre. He teaches theory, composition and piano at Dunie Weizman Conservatory of Music.

Creativity and a List of works
At the Batumi Musical Theater of the State Music Center, Khitarishvilli orchestrated and arranged the opera Princess Turandot, based on the story by Carlo Gozzi, V.Bellini's, Capuleti e Montecchi, Notre Dame de Paris by R. Cocciante and G. Presgurvic's Romeo e Giulietta.


Mindia Khitarishvili takes a bow after the premier of his Rock-Opera "The ballad of Tavparavneli" (2010)
Rock - Operas. "The Earth Time" /1996-98/ (Libretto J.Charkviani) "The ballad of Tavparavneli" In two acts. /2010/ (Libretto I.Gurieli) based on the play T.Chiladze. Premiered in 2010. Batumi State Drama Theatre. Director-producer George Tavadze. For the Symphony Orchestra Choreographic novels /2004/ Blues notes /2007/ Quinta essentia /2008/ 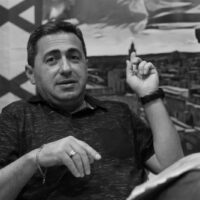