Soprano, Na’ama Shulman Was born in 1994, Israel.
Na’ama started her music studies at the age of 7 years old, playing the piano for 10 years, among it also studied composition for 8 years.

Na’ama graduated her B.A. degree with honors and her Master’s Degree in The Jerusalem Academy of Music, where she studied vocals with Marina Levitt and the vocal coach Dr. Ido Ariel.
Na’ama was a participant in the joint program of The Jerusalem Academy of Music with the Israeli Opera Studio in the season of 2017-2018.
In the seasons of 2018-19 and 2019-20, Na’ama is a member in the Hamburg Opera Studio, where she performs a variety of roles on the main stage. 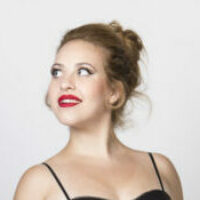