An Andres Segovia Award winner (Musica en Compstela, Spain 2006), Nadav Lev’s 2008 Carnegie Hall debut was hailed by Classical Guitar Magazine as “sensitive and nuanced performance…a talented and engagingly musical performer… his stage presence is entirely gracious and personable.” Classical Guitar described Nadav’s debut album as “a CD to savour and delight in. His playing is of the utmost authority and the entire program is a sheer delight from start to finish.” Lev’s next album is to be released by the prestigious Delos label, and will feature solo and chamber music dedicated to him by Israel’s most prominent young composers.

An Israel native, Nadav was the only guitarist to recently win the America-Israel Cultural Foundation prestigious Abroad Studies award, and among other prizes he won are the “Ra’anana Guitar Competition” first prize, the “Jerusalem Guitar Competition” Rodrigo Prize and Artists International’s Special Presentation Award.

Nadav has been performing throughout the US, Israel and Europe, in venues such as Carnegie Hall, Lincoln Center and Merkin Concert Hall in New York, the Centro Cultural Espanol in Miami and Iglesia De Sampaio De Antealtares in Santiago de Compostela, Spain. He was invited to give recitals in prestigious concert series such as the John Marlow Guitar series in Washington D.C. and performed in orchestral and chamber productions, with groups such as the Israel Symphony Orchestra Rishon Le Zio and the Israel Kibbutz Orchestra. Mr. Lev also performed at the International Asian Composers League festival 2004, the International Guitar Festival in Tel Aviv and in special concerts dedicated to contemporary Israeli music organized by Tav+ Magazine.

Primarily a classical guitarist, Mr Lev performs in an extraordinary variety of styles and forms – from classical to rock to jazz and improvised music. He was invited to give recitals in prestigious concert series such as the John Marlow Guitar series in Washington D.C. and performed in orchestral and chamber productions, with groups such as the Israel Symphony Orchestra Rishon LeZion and the Israel Kibbutz Orchestra.
Recent highlights include solo in Piazzolla’s Double Concerto along with legendary bandoneon player Raul Jaurena, and concerts with Lev’s newly formed Prototip Trio, together with mandolin player Avi Avital and harpist Sivan Magen.

Mr. Lev’s numerous media appearances include a special program dedicated to him by NYC’s WKCR radio station and an appearance on NY TV channel and WQXR; His playing was also featured on Galaz radio station, Israeli Educational Television Channel, and he can be frequently heard on Kol Ha’musika – the Israeli classical channel.

Lev graduated with honors the Master of Music program at the Manhattan School of Music, under the guidance of David Starobin and David Leisner. He earned his bachelor degree Cum Laude from the Rubin Academy in Tel-Aviv, where he studied Composition with Ruben Seroussi and Itzhak Sadai. He also holds B.A in Philosophy from the Tel- Aviv University. During his studies Nadav composed several pieces that were performed in Israel, as well as music for theater productions. His piece “If I could tell you” was performed at the international Asian Music Festival 2004 at the YMCA Jerusalem hall. Nadav has attended master classes in Europe and in the US with world renowned guitarists Pepe Romero, David Russell, Sharon Isbin, Manuel Barrueco, Alvaro Pierri, Benjamin Verdery and Wolfgang Lendle.

Nadav Lev was born in kibbutz Nachshon, Israel, and began playing jazz guitar at the age of nine. After graduating with honors from the Jazz Department at the “Thelma Yelin” High School for the Arts, he went on to join Israel’s Air Force Orchestra a guitarist. Turning to classical music, he began studying classical guitar and composition with Ruben Seroussi.

An active music educator as well, Nadav is currently on faculty at the Lucy Moses School at Kaufman Center and the Third Street Music School Settlement in New York, as well as maintaining a private studio. 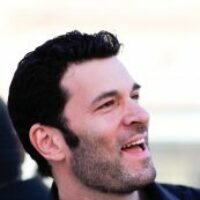