Nathalie studied at the National Conservatory of Marseille, in Pierre Barbizet’s class where she received the Gold Medal, the first Grand Prix of the city of Marseille.
She passed the entrance examination to the Conservatoire National Supérieur de Musique de Paris (CNSMDP).
There she studied piano with Jacques Rouvier and chamber music with Regis Pasquier and Roland Pidoux.
She was awarded first prize in piano and chamber music.

She perfected her performance at Salzburg Mozarteum with Sergio Perticarolli. She took part in many academies and master-classes, thus benefiting from the advice of famous pianists such as Georges Pludermacher, Bernard Ringeisen , Bruno Rigutto, Pascal Devoyon and Francois Rene Duchable.

Pnina Zalsman, one of the greatest Israeli piano teachers, then notices Nathalie at the Rubin Academy, where she works and is impressed by her playing.
She regularly performs in Israel in the most famous Israeli halls of music: Mishkenot Shaananim auditorium in Jerusalem, Yad Labanim Auditorium in Raanana.
She is also regularly invited to perform abroad. She participates in television and radio programs as well as in cinematographic production (Meourav Yeroushalmi, Rokdim basalon )
Nathalie is state certified as piano teacher and jury member. She teaches at the Raanana Municipal Conservatory.

Nathalie Seror Nakash is a piano virtuoso. She doesn’t save her talent only for classic initiates.

In 2005 she tried to convey her passion through a concert “the Mephisto Show”, a modern version of classic concert blended with modern music.

In 2010 she promoted this very concert through the “Classic New Generation”- the Eighth Sense; blending classical piano playing with its electronic rendering , so as to glorify the treasure of classical works … as if Beethoven or Mozart , parachuted into the 21st century , were revisiting their works in the light of modernity ” (…) during a concert I consider music as an integral part of arts such as photography , video , light projections , philosophical sayings , story-telling or even classic and modern dancing (…) “.
“(…) playing music is belonging to the infinite, entering the never-ending cycle of life. Music makes us oversensitive and subtly attentive (…) Music is associating sensations to colors and shapes. Music is like a mending prayer that soothes us and fills up our inner cracks.
One plays music not because it’s beautiful but because it’s alive! (…) the performing artist expresses himself and moves around in a dream-like, magic-like world”.
Asking the fundamental questions of existence and seeking a certain truth are part of what Nathalie Seror Nakash, as a concertist , cares about : “It is through an incessant quest that one can transcend ones pianistic playing. One must put cards on the table, wiping away any make-up in order to put forward authenticity and be loyal to what one wants to convey. (…) I see my encounters with the great composers’ works of art as an encountering with people alive. I play, so as to be all ears, to be in symbiosis. I take their place in order to feel their message better and understand their verbal and musical intentions. (…) One can reach good music only by trying to find out why one needs it so much (…) My playing is the expression of my soul because I think that one plays like one exists .(…) Music enables me to connect with my inner world , my universe; I then listen to this melody that flows through me and of which I am the messenger .(…)For an artist to succeed, he has struggle with himself ,” risking his life”, like an acrobat without a net … because playing music is, for me , going beyond plain artistic expression (…)”
Francois Renee Duchable: She eloquently and generously serves (the) music. She is a bright person and artist. She is genuine.
Henri Dutilleux : Her performance of Schumann concerto in A minor is gripping (….) she has a sense of phrasing , an outstanding legato.
Pierre Barbizet : Since she was young she has had the sense of stage and of musical transmission. I love her.
Sergio Perticarolli: Each of her performances is an event rich in emotions colors elaborated sonorities (…) her musical generosity makes her performing remarkable .

Nathalie is the founder and musical director of the « Les rendez-vous de Nathalie musical meetings » the meetings consists of inviting different artists from the whole cultural spectrum to play and expose their art in various venues . 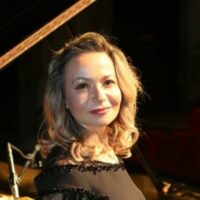