Nava Gidanian-Kagan is an Iranian-Israeli artist based in New York and Jersey City. Her works explores the fragility of the human condition facing the mortality of all living things. Reflecting on our own mundane existence in all its complexities, in attempt to transform it into a very intense, almost seductive tangible experience.

Nava was recently awarded the Eileen S. Kaminsky Family Foundation Residency at MANA Contemporary (2017), The Elizabeth Greenshields Foundation Award (2014), and The Terra Foundation for the Arts Award in Giverny, France (2014). She also participated in the Residency programs at: The International School of Painting, Drawing & Sculpture in Umbria, Italy (2005, 2004) and The Prado Museum, Madrid, Spain (2007).

She holds a Master of Fine from the New York Academy of Art (2015), and she graduated from the Jerusalem Studio School in Israel (2006). 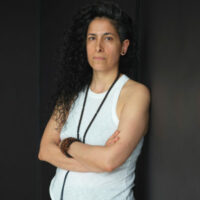