Nimrod David Pfeffer is a conductor at The Metropolitan Opera, and Music Director of the Lyric Opera Company of Guatemala.

In 2016 Mr. Pfeffer was named Music Director of the Lyric Opera Company of Guatemala, after conducting the company's inaugural production of Verdi's Rigoletto. In the following seasons he conducted in Guatemala new productions of L’Elisir d’Amore, La Bohème, and La Traviata.

Mr. Pfeffer is also a concert pianist who performs regularly as soloist with orchestras, recitalist, chamber musician, and vocal accompanist. His piano career highlights include his debut at Carnegie Hall’s Weill recital Hall in 2008; performances of the music of Chopin on the stage of The Metropolitan Opera in American Ballet Theatre's production of The Lady of the Camellias in 2010; a live solo recital broadcast from the Russian Kremlin in 2007; and his solo debut with the Israel Philharmonic Orchestra in 2008, playing the World Premiere of Aharon Harlap's Second Piano Concerto, which resulted in a dedication to him of Mr. Harlap’s Symphonic Dances for Piano and Orchestra in 2015.​

Dedicated to promoting dialogue between Arabs and Jews in Israel, Mr. Pfeffer received the Davis Projects for Peace Award for presenting a fundraiser in honor of peace at Carnegie Hall.

Mr. Pfeffer holds a Master's Degree in Orchestral Conducting as a student of Alan Gilbert at The Juilliard School, as a recipient of the Bruno Walter Scholarship. Upon graduation from Juilliard he was awarded the Charles Schiff Conducting Prize and the Norman Benzaquen Career Advancement Grant. He also holds a Master’s Degree and Professional Studies Diplomas in Piano Performance and in Orchestral Conducting from Mannes College of Music, and is a graduate of The Metropolitan Opera's Lindemann Young Artist Development Program. He was a recipient of grants from the Bagby Foundation for the Musical Arts and the America-Israel Cultural Foundation. Among his teachers were Pnina Salzman, Vadim Monastyrski, Gideon Hatzor, Michael Wolpe, André Hajdu, Victor Rosenbaum, Carl Schachter, Claude Frank, Byron Janis, Alan Gilbert, and Richard Goode. 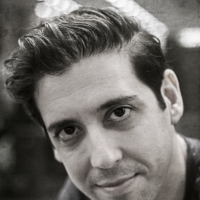