Israeli cellist Nitzan Gal enjoys a wide range of performing experiences from presenting traditional repertoire to premiering new works, including Aharon Harlap’s concerto for cello. Nitzan had collaborated and played with different groups and orchestras including, the Borromeo Quartet, the Callithumpian Consort, Palaver strings, the Israel Philharmonic, the Israel Camerata, the Albany Symphony, Boston Philharmonic and others. Nitzan had played in various series including the First Monday concert series in Jordan Hall, the Boston Symphony Preludes concerts, and the Jerusalem Academy’s concert series. She also recorded to the Israeli classical music station Voice of Music.

Recognized for her creativity and musical talent, Nitzan has been the recipient of various scholarships, including from the America-Isarel Cultural Foundation, the Siday Fellowship for Musical Creativity, and the Zfunot Tarbut Association. Through the years, Nitzan has worked in masterclasses with many renowned cellists such as Frans Helmerson, Gary Hoffman, Raphael Wallfisch, Ralph Kirshbaum, and Paul Watkins, among others.

Nitzan holds two Bachelors degrees from the Jerusalem Academy of Music; one in Music Performance and one in Music Education. She continued her studies earning a Masters Degree from New England Conservatory where she is now a doctoral candidate. Her principal teachers include Yeesun Kim, Zvi Plesser, Shmuel Magen and Michal Korman. 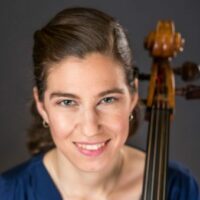