Nitzan Temerlies was born in London, 2002. She began her violin studies in 2011 in the Ra’anana Music Center, in the class of Marina Ziskind, and since 2019 she has been studying with Dr. Guy Figer.

Nitzan currently studies at The Buchman-Mehta School of Music with Dr. Guy Figer, with a full scholarship.

Besides her academic studies, Nitzan is a regular participant in various chamber music ensembles and has graduated as one of the leading violinists in all of the major Excellence Programs of the Jerusalem Music Center, such as in the Young Israel Philharmonic Orchestra, the David Goldman Program for Outstanding Young Musicians, and the Huberman Project for aspiring Soloists.

Throughout the many masterclasses Nitzan has participated in, she had the privilege of working under the instruction of distinguished artists & pedagogues such as Asaf Zohar, Svetlana Simanovsky, Sergei Bressler, Zvi Carmeli, Yi-An Xu, Lahav Shani, Nitai and Hillel Zori.

Nitzan has played in many venues, including the Henry Crown Hall, where she played solo with the Jerusalem Symphony Orchestra, as her debut as a solo violinist.

In 2018, Nitzan was awarded 2nd prize in the Aviv Competition in Ra’anana, and the 3rd prize, the following year.

Nitzan was awarded an AICF scholarships in 2021. 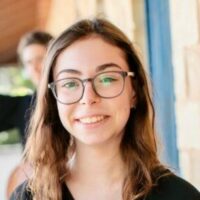